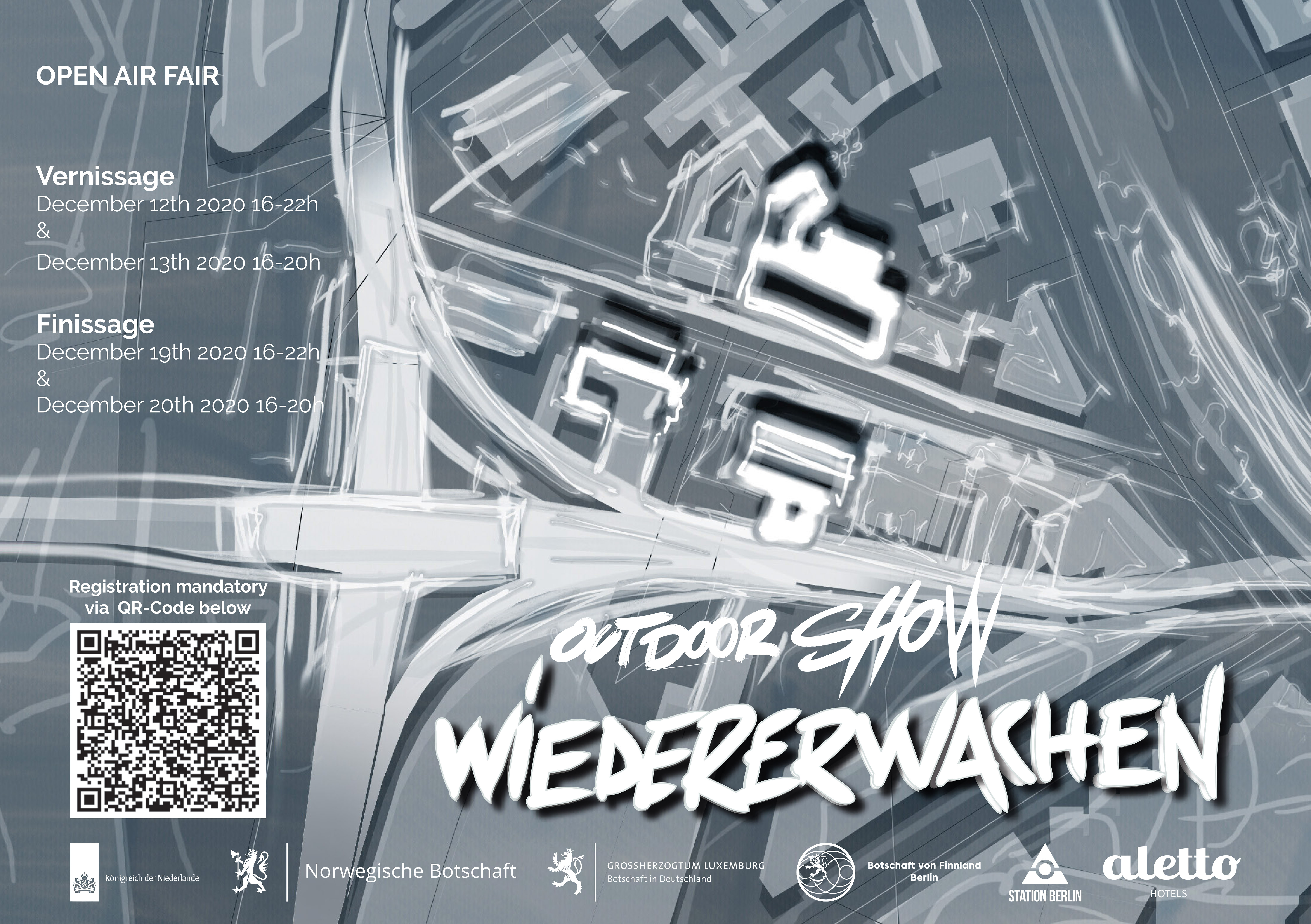 "Artists should be witnesses of their time in history. We need to conquer new spaces for art." - Robert Rauschenberg"

The art fair WIEDERERWACHEN reminds us of the power of the independent art scene and subculture of Berlin. WIEDERERWACHEN is an appeal to the art world to come together to reflect on their sense of community and on defying this year’s circumstances, which have led to the cancellation of numerous exhibitions. The initiator and curator of the project is the German photo artist Semra Sevin. She has created a number of artist-run exhibitions over the last years.

In WIEDERWACHEN, 31 artists will transform the parking lots, terrace and windows of the STATION Berlin and the Hotel Aletto in Luckenwalder Straße at Gleisdreieck, for 9 days, to ultimately create an open-air ‘Gesamtkunstwerk’ altogether. The genre ranges from sculptures, photos, paintings, paper works and light installations to performance art. ‍

HIGHLIGHTS of the art fair: The artwork can be viewed from the streets and inside the windows of three buildings, as well as from the subway line 1 & 3 towards the terrace of STATION Berlin. On the opening day, at 18h, Manfred Peckl & Ivar van Urk perform 'ferp can no more' on the parking lot. At 19:00h, Catherine Lorent will perform an artistic music piece. A QR Code is displayed next to each art work with more info about the artist and the work. 1 on 1 guide tours can be booked with the curator.

The WIEDERERWACHEN fair stands for the experimentation with new formats. As Rauschenberg said, 'Artists should be witnesses of their time in history”. “We need to conquer new spaces for art.' Semra Sevin, initiator and curator of the project, says.

WIEDERERWACHEN addresses the Berlin public in a highly individual but collective modus operandi through the voices of a heterogeneous group of interdisciplinary artists. WIEDERERWACHEN refers to the powerful tradition of a Berlin art world, which initiated unconventional and creative formats over the last decades. The art fair shows that unconventional projects, beyond institutions, are still possible in Berlin.

THE LOCATION in Luckenwalder Straße at Gleisdreieck has become a location with international outreach, since 1875; From a European shipment company to later, a postal station. Last but not least, the STATION Berlin became known for hosting some of the most prominent European creative venues, as for the renowned 'abc art fair'. The three buildings allocated for the art fair WIEDERERWACHEN, form a trinity together, just like the Gleisdreieck itself.